HEY THERE....want to join the community? Sign-up for notifications about the show!

"Because the more we all raise our hands and share our OWN motherhood stories, the less alone you might ultimately feel in YOURS."

You, Momma, CAN DO HARD THINGS 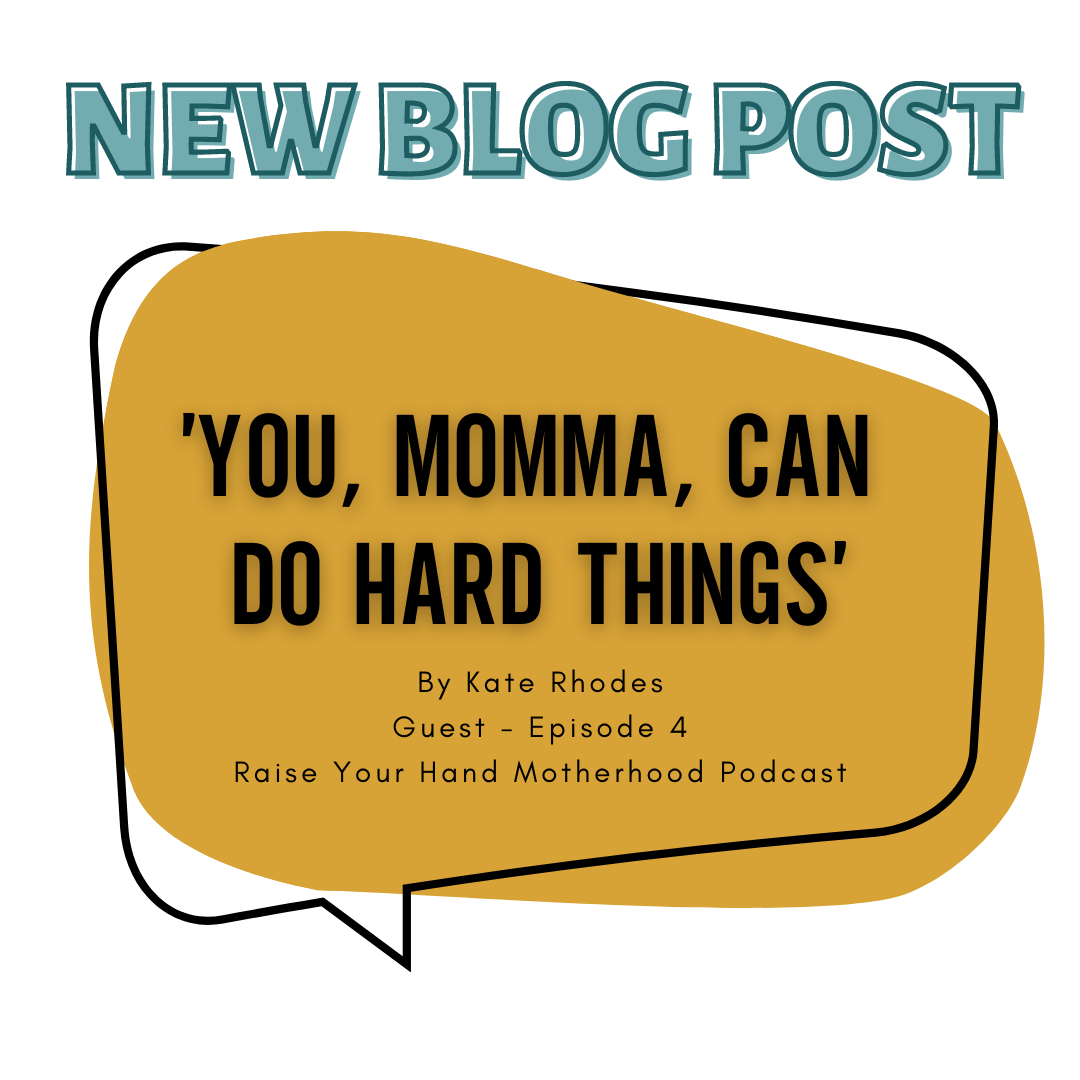 The art of motherhood.

What a fascinating journey that so many of us go on. Yet, what is interesting about this journey is that there is no one ‘right’ direction, no direct route to the top, no ability to ask Siri or Google for the ‘right’ answer without thousands of hits and no highlighted ‘fastest’ route. We all start at the same start line, yet when the gun goes off (or that water breaks), we head out running, trying to navigate which path will get us out successfully.

My path felt something like this: when I passed ‘go’- my old self stayed at the start line, waved goodbye and whispered ‘good luck’ and I took off waddling down what I thought would be the path of ‘baby bliss’, elation, effortless ease of transition and long, smooth stroller walks. HA! My mind had other plans and detoured me down a path that in the moment felt intense, isolating, exhausting and felt like there would be no end. Upon reflection, 3.5 years in, I know that I am stronger for it, but in those moments, I would be lying if I didn’t admit that a large majority of those first 18 months I longed for the days pre ‘mom’ status, the ease of life and the self that I had left at the start line.

I have always been a slightly anxious person and that anxiety followed me into pregnancy and reared its gnarly head postpartum. You always hear about postpartum depression, you get the pamphlets in the waiting room of the medical offices, but I don’t recall being told about postpartum anxiety or sifting through a pamphlet until it was already knocking on my doorstep and making itself comfortable in my psyche.

It started to creep in prior to giving birth, but got louder the moment the last of approximately 20+ stitches was set and my daughter was attempting to nurse for the first time. All of the control that had been attempting to keep my anxious thoughts at bay exited with the placenta and the racing thoughts, extensive indecisions, mental exhaustion and uncertainty invaded tenfold…. And stayed, all nice and comfy for the next 18 months.

The rollercoaster of hormones in those first few weeks postpartum, coupled with a drastic change in sleep patterns and attempting to be attentive to a new human who relies on you for literally everything is (in my opinion) not widely discussed. I didn’t feel those immediate feelings of pure and undeniable love and connection with my daughter. In fact, quite the opposite. There were some feelings of resentment as I felt like I was onboarding to a job that I didn’t believe I was qualified for with a manager that was overbearing and had me put in long hours with no breaks. I felt guilt for not ‘feeling’ what everyone told me I should be feeling, that this new identity of motherhood would be ‘the best thing that ever happened to me’. I felt uncomfortable in this new normal, in this new role. Not only was I learning the in’s and out’s of this new human that was part of my DNA, but I was trying to find some ounce of recognition in my own self for who I now was. The angst of not meeting those expectations and already feeling like a failure existed from the start. I had a slow and uncomfortable recovery, a painful bout of mastitis and an unexpected hospital stay at 3 months when my daughter had a UTI (cue extra mom guilt). The anxiety was triggered around feeding times to avoid a resurgence of mastitis, yet keep up the supply, an unhealthy obsession watching for any signs or sounds of a bowel movement with a then rigid rule of changing and cleaning the area immediately to avoid another UTI,  a flooded mind of wake windows, leap tracker apps, sleep training, crib transition, food introduction and (re-introduction), milestones and growth spurts, pumping, hakkas, disinfecting bottles, failed soothers, feeding schedules, daycare waitlists, tummy time (or lack there off), weaning, navigating relationship changes (and expectations) with my partner, personal body changes post recovery, boundary establishment (or lack thereof), mom and tot activities, societal expectations, parenting courses - and in all of that, the inability to establish any sense of control. In the words of Ross Geller- my mind was in a constant nervous state of yelling- PIVOT!

The clock was my coping tool - my ability to re-establish some sense of regularity and control. The clock was also my detriment.  I had a falsified notion going into postpartum that my daughter would be an effortless extension of me and we would flawlessly navigate postpartum together, hitting up mom and tot swimming lessons in matching suits, me sipping coffee and her taking long naps in her crib. I had seen other mom’s do it - so I was good…right? Wrong. That timer started from the first morning feed and was followed militaristically until dad pulled in the driveway from work. We never made it to mom and tot swimming class because that interfered with a nap time (that actually never existed because she never napped for longer than 30 minutes unless she was strapped to me). We went to mom and tot story time, but instead of participating in circle time and the parachute like the other babies, my daughter stuck to me like glue and was thoroughly unimpressed by anything else happening around her.

Attempting to pull up on things?…nope.

Walking at 12 months? Nilch - Tac on another 6 months to that.

Feeling that instant motherhood sense of connection and not just a job that I was passing or failing?....Those feelings kicked in around the 2 year mark. I recall one day looking at my husband and saying ‘this isn’t easy, but she is pretty f&*king cool’.

My path took some twists and turns mentally and physically. We are still climbing, recovering and pivoting 3.5 years in.  I met some fellow kick-ass moms along the way and continue to do so. There are moms ahead of me that supported and lent a hand and I make sure to do the same for those coming up behind me. I sought out professional help around the 6 month mark, which looking back, I should have started much sooner. It gave me some practical tools to implement; to break some of the expectations I had built up in my mind; to free myself from some of the heaviness and guilt I was feeling and help me navigate my new role as a mother, and reintroduce myself to myself and as a partner, a successful businesswoman, and a member of society.

Maybe your path has been smooth-sailing or maybe your path has been a little rocky and unexpected. I am aware that my experience, compared to others, is not nearly as intense or traumatic. Regardless, there is power in knowing you are not alone. There is power in knowing that your words and experiences can be impactful to someone else who may be going through the same thoughts and feelings as you.

There is power in knowing. Period.

In the words of Glennon Doyle - we can do hard things.

You, momma, can do hard things.

(Episode 4 Guest - MOTHERHOOD ANXIETY & MANAGING EXPECTATIONS (BOTH SOCIETAL & OUR OWN) 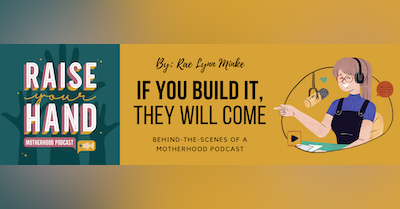 Behind-the-Scenes: Season 1 of a Motherhood Podcast

'If You Build It, They Will Come' - Behind-the-Scenes of a Motherhood Podcast.

Motherhood Tips for Finding Time and Rediscovering Yourself

Welcome to Episode 9 of the Raise Your Hand Motherhood Podcast. I’m your host, Rae Lynn Minke, and today we’re talking about TIME (or rather - the seemin…

HEY THERE....want to join the community? Sign-up for notifications about the show!

Email has been submitted.